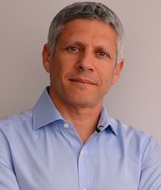 Bio
Ezequiel Szafir (1971), Ph.D., studied at the Engineering School of UADE University, Argentina, and has been a research fellow at the MIT Center for Technology and Industrial Policy Development in Boston, US. He received his Masters in Management from the ADL SOM in Boston, US, and his PhD in Psychology from Tilburg University in the Netherlands. He has also studied literature and writing at Cambridge University, UK.

Ezequiel started his career as a journalist, writing for mainstream newspaper Clarín and for the financial daily Ámbito Financiero. He also contributed to several magazines down in Argentina, in the US and in Germany. His first novel, Marina de Buenos Aires, was published by Zeta de Bolsillo. His new novel, París 2041, has been published by Ediciones B - Grupo Zeta.

On the professional side, he has worked as a consultant for Arthur D. Little and McKinsey and Co., has been a Partner in the Financial Advisory Services Practice at Deloitte, Strategic Planning and Operations Director at Nike Europe, Vice President at Liberty Global, Managing Director of the Cortefiel Group, and Vice President at Amazon Europe.  In the past 20 years he has worked and lived in Argentina, the United States, The Netherlands, Luxembourg and Spain, were he now works at Santander Group as CEO of Openbank.